Ok, so I'm totally late to the party, but I got inspired by all folks who made it in time to do the WIP: The Movie Blogfest last week, and thought I'd still post.

The idea is to "cast" the key characters in your novel, were it to be made into a movie. Cool huh?
So here is my cast! Caveat: I definitely went for 'the look' over the acting style/experience, which would have taken waaay too much time to sort out. So without further ado:

The Awakening of Minna Gray .... If it were a movie 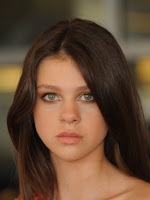 Minna's spent her entire life working alongside her parents as they struggled to be promoted into Emerald District. Now that they've 'made it' the dreamworld has lost much of its appeal: she still never sees her parents and her strange visions seem to be getting more frequent. When two boys she's babysitting go missing, her panic soon turns to horror: they're not just missing. In fact, with the exception of her best friend, no one else remembers them. They've been erased.

Piper is Minna's best friend. Aspiring architect/ballerina, she's brilliant, easily distracted, and always ready for adventure. That is, until her brother goes missing. She soon discovers that real adventures are a lot different than the ones you dream up to sneak out of school.


Corrin's there for Minna when she needs it most. Best of all he doesn't just believe her when she says the boys she's looking for have been erased ... he actually thinks he might know where they've gone. With his knowledge of the Resistance, they might be able to find them. But they'll have to work quickly, before it's too late.

And yeah, I picked this actor mostly for his messy hair. Ha!

Last but perhaps most importantly, here are a few songs that I'd include on the soundtrack for the movie:

Silvia - Miike Snow
Love this song (except for the pronunciation of coup de grâce ) The video probably fits the feel of the sequel better than the first book, but ...

I Follow Rivers - Lykke Li
Oh Lykke Li. I would put anything/everything by her on the soundtrack.

Heavy in Your Arms - Florence and the Machine