So Australians are a funny bunch. Since starting his job, Rob has had to file approximately 316 pages of paperwork to be allowed work in his own laboratory (one of these forms was online and allowed him the option of selecting his title as Brigadier, which he infuriatingly would not do for me, but more on this later). Meanwhile, all across Sydney, parents willingly nudge their small children several feet meters closer to death each and every day. I am talking, of course, about the playgrounds.

Sydney is filled with parks. Pocket parks, lawny parks, treeish/brookish parks, parks with racetracks and cricket pitches (is it called a pitch?) and fountains. Parks with trees dripping with flying foxes. Some of these parks have playgrounds. And 100% of these playgrounds spell inevitable doom for anyone who dares tread their recycled tire matting. It is just a matter of time.

Take Exhibit A. Climbing pyramid. Or as I like to call it, Mount Doom. Take a moment and consider the scale here. Those kids don't stand a chance. If they don't end up strangled by the ropes, they'll certainly plunge to their death at the top of K2. Come on folks, Really?

These terrifying structures literally riddle the parks all across New South Wales. If that weren't enough, let's add Exhibit B. Un-manned Ziplines. Now when this photo was taken the victim was somewhat close to the ground so you really can't comprehend the horror here. But considering she started approximately 155 feet in the air (+/- 150 ft), I was floored. And they just let kids grab on and hope for the best, 24/7/365. The park doesn't even tie it up in the middle of the night. And we all thought China had the impending population pyramid problem. Nope. I'm here to tell ya folks: it's Sydney, Australia.

But these are kind of boring, you say. We've seen this before. Yawn.
All right, why not mix it up a little? Better yet, why not mix and match? My personal favorite, Exhibit C. Carousel of Death. 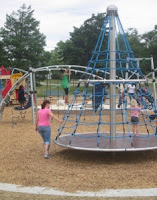 Remember those Merry-Go-Rounds that were so much fun when we were little banned across the U.S.? Well here in Sydney, they're back! With an added feature: on top of the merry-go-round, you get Mount Doom. That way, when you get going fast enough, you can fly off from approximately 20 feet in the air!!!! So. Cool. 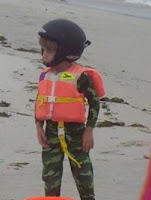 So this is why my kid (if I were ever to have one) will look like a dork. Because he/she/it will not be let out of the house without helmet and neck-brace. Ever. Depending on destination, life-jacket and goggles will also be required. Cruel? Not compared to the near-death experiences millions of Sydneysiders subject their kids to each day. Will my kids get made fun of? Sure. But in the end, they'll thank me for it.


In fact, I have calculated that over the course of my life, I have been awake approximately 2-3 years more than Rob, despite the fact that he is 1 year older than me. Yes we actually calculated this, and yes, you read it right. We go to bed at the same time every night; then I wake up at 5 or 6, and he wakes up at 8 or 9. You calculate this out over the course of a week, and I have been awake approximately 21 hours longer that week than he has. Stretch it out to a month, I've been awake for 3-4 more days than him.


Some days I love this. I wake up and get twenty million things done before anyone else is awake. Other days I hate it, because no matter how tired I feel, I cannot go back to bed. I. must. get. up. On the flip side of things, at night, I can go to sleep really fast. Really fast. I have been timed. I am not sure what my average is, but the record is 29 seconds from declaring intent to sleep.

Posted by Carissa at Friday, January 27, 2012 No comments:
Email ThisBlogThis!Share to TwitterShare to FacebookShare to Pinterest
Labels: Sydney

Melody and Harmony are identical twins. For sixteen years they didn't realize the other existed, and their lives were very, very different. Melody's a Pro pregger about to land a killer contract. Harmony's a god freak who has all the right answers. So when Harmony shows up un-announced on Melody's doorstep intending to stay and convert her sister, things are bound to go wrong. And they do. Fast.


This story is brilliantly told in short, snappy chapters from two interchanging POVs: Melody and Harmony. I literally could not put this down. Literally. In the vein of M.T. Anderson's FEED, it takes awhile to get used to the short choppy sentences and jargon of this future dystopian society wherein adults are no longer able to reproduce, so teenagers are pimped for "pregging" and everyone has a constant link to MiNet. A warning: the novel does not shy away from using explicit lingo to get its message across. The entire world McCafferty has created is at once incredibly believable and entirely disconcerting, with its cock-jockies, massSex parties, and preteen funBumps. Weeks after reading it, I still don't know what to think, except that this book is entirely brilliant, wholly disturbing, and is going to make a lot of people mad (just check out the amazon reviews). But it'll definitely make us think.