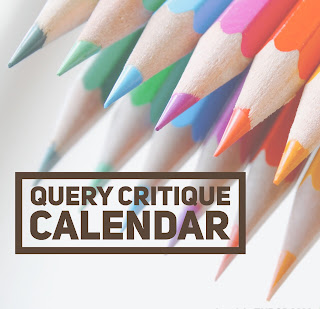 As a complement to my Contest Calendar, I'll be posting opportunities to receive free, pro query letter critiques here!

Free Query Critiques from the pros!?!

There plenty of free opportunities to get query letter crits from your peers (see more on that here). You might also want to check out my Successful Queries Database for inspiration when drafting. But sometimes you want that extra assurance from an industry pro or someone who's made it through the query trenches themselves.

There are also lots of paid opportunities out there to get professional feedback. Some editors and lit agents offer workshops or paid consultations, and freelance editors will look at your query for a fee. Agents and published authors will sometimes offer query critiques to those who donate to causes such as WordsForChange, WritersForHope, or YARunsA5K, or Pens For Paws. This type of feedback is golden, and I took advantage of it myself when I was in the trenches.

But sometimes we need that professional feedback and are short on cash. This page is for us.

The list on this page is limited to FREE query feedback opportunities from:


Check it out! Do be aware that most of the opportunities on this list are giveaways, and therefore it's not guaranteed that you'll be selected to receive a critique. However, most of these also provide public feedback. Reading through the comments on previous winners' entries can prove super useful!

And please let me know in the comments if you've seen another upcoming opportunity for free, professional query feedback!

NOTE: DATES PROVIDED ARE TYPICALLY WHEN THE GIVEAWAY ENDS.

Ongoing: Pitch Wars Critiques
( These seem to be popping up on a rolling basis.
Try this twitter search or this one to find the latest. )


Also check out these other opportunities
which are available on a rolling basis:

Literary Rambles
This site often runs Query Critique Giveaways alongside their Author-Agent interviews. The site is a bit difficult to navigate as it doesn't have a label for its critique giveaways, but usually there is an announcement right at the top of the page, above the header for each blog post.

An Agent's Inbox -- hosted by Krista Van Dolzer
A recurring event where an agent comments on several queries. See Krista's site for details on which agent is participating, and how to enter!

Bookends Query Critiques -- hosted by Bookends Literary
They've been on hiatus, but check out their previous critiques. And submit yours for possible critique (it will be a public critique, like Query Shark, fyi) on the query critique form.

Operation Awesome: Pass or Pages
Pass or Pages is a recurring contest where a randomly selected group of authors will receive public (but anonymous) feedback on their queries and first five pages from lit agents. The genre and age category changes from round to round, so be sure to keep checking to see if yours comes up! (You might also get an agent request, if they like it!)

Caitlin McDonald
In adddition to her paid private query reviews, Caitlin hosts a Weekly Workshop every other Friday in which she selects a query from her slush and publicly dissects it with feedback! Follow her sub guidelines to be considered for participation!

Carrie Pestritto
As of 2016, Carrie hosts a semi-monthly public query critique opportunity on her blog. She'll critique the query and open her comments section for others to provide feedback too.

Jessica Sinsheimer
This fab lit agent sometimes offers (and/or coordinates) query critique giveaways, and usually advertises them via twitter. They may happen around the time of #MSWL (Manuscript Wish List) updates, so keep an eye out! This link should be a good search to get you started.

Sub It Club
The Sub It Club, in addition to having tons of great query-writing tips, ocassionally hosts query letter critique giveaways from agents and published authors!

Twitter Giveaway Announcements
Keep your eyes peeled on Twitter for announcements about "query critiques" or "query letter feedback" and the like. Recently, I've seen @patricianels, @naughtybrent, @precociouspenny, @molly_jaffa, and @petejknapp announce query feedback opportunities this way. You might also try this Twitter Search.

Contests
Some (though not all, or even most) agent-judged query or first 250 contests will include include a component in which, in addition to requesting/rejecting agents provide feedback on entries. Keep your eyes peeled for those!

Query Shark
Last but certainly not least, is the illustrious Query Shark (aka literary agent Janet Reid). She is a well-known public shredder of queries on her blog. You'll want/need to read through all the previous entries first as she doesn't accept subs that have the same mistakes she's already thoroughly addressed in previous "shreddings."

Note: Some may only offer critiques intermittently, but this is a list of authors with lit agents and literary agent interns who have fairly recently (i.e. in 2016) and recurrently offered query critiques, so you might browse their blogs to see if they are offering one again!

Carissa Taylor (me) - Represented by Jason Anthony of LMQ
I occasionally host "The Query Lab" ... a themed query critique giveaway on this blog! There are opportunities for both public and private feedback!

D.H. Porier - Repped by Laura Bradford of Bradford Literary
D.H. often mentions her query crit opportunities on her twitter account, so be sure to follow her there too!

Emily Moore - Repped by Jessica Schmeidler of Golden Wheat Literary
Emily,  former lit agent intern now aka "The Query Helper" frequently hosts giveaways on her blog and/or twitter, so keep an eye out!

Janice Hardy - Repped by Kristin Nelson of Nelson Literary
While Janice's "Real Life Diagnostics" are largely focused on 250 word snippets from works-in-progress, she has in the past examined query letters. I'd double-check before submitting though.

Kyra M. Nelson - Lit Agent Intern at A + B LiteraryAlso known as "Captain 'Query' Hook," Kyra has a number of public query critiques on her blog, and ocassionally offers giveaways via twitter in addition to her professional (paid) services.

Michelle Hauck - Repped by Sarah Negovetich of Corvisiero Literary
In addition to hosting contests such as #QueryKombat, #SunVsSnow, and #NoQS, Michelle also holds a Spring Query Extravaganza and a Fall Query Extravaganza -- a public query critique leading up to these contests. Watch her site for more details on how to enter.

PitchSlam Critiques
During PitchSlam season, the contest hosts will sometimes offer query critique giveaways via rafflecopter on the page above. There are other types of crits given too (for example: twitter pitches, first 250 words, first five pages, etc).

Pitch Wars Critiques
Leading up to PitchWars, some mentors will be offering critiques. Most seem to be popping up on a rolling basis via Twitter, or Brenda Drake's blog, or this PitchWars community: Writing With Mentors. Try this twitter search to find the latest.

Pub Crawl
As of 2016, it looks like the PubCrawl Podcast folks will be critiquing queries on perhaps a quarterly basis. This is a link to the original set of critiques. Keep your eyes peeled for future opportunities!

Other Places to Find Query Feedback

In general, look for query critique opportunities from the hosts of pitch contests such as PitchSlam, QueryKombat, SunVsSnow, Pitch2Publication, PitchWars, etc.

Try this Twitter Search for the latest query critique/feedback announcements.

{ check out the contest calendar here }

May 14: PitchWars Mentor Crit and/or Book Giveaway
-- hosted by WritingWithMentors

June 20-24: Feedback on Adult Fiction Queries from Agent Pete J. Knapp
** Note: this is not a full critique, but he will give 1-2 sentences of feedback**
-- hosted by Peter Knapp of New Leaf Literary

June 20-24: The Query Lab Critique Giveaway #PitchAmérica Edition
(Entry will be open and posted here on June 20)
-- hosted by me ;o)  Carissa Taylor


Until Aug 3: One-A-Day Query Critique Giveaway  (though note she may be taking the occasional hiatus, so check her feed for the latest deets) -- hosted by Sarah Janian

May 17: Pass or Pages -- hosted by Operation Awesome

April 9: Query or First 5 Crit for #DVpit writers -- hosted by author Joan He

Know of any other opportunities to get free query letter feedback from industry professionals, literary agent interns, or agented / published writers? Please let me know in the comments!